ARTICLE I : CREATION AND MEMBERSHIP OF ENTITY
ARTICLE II : OBJECTIVES OF THE INTERNATIONAL FEDERATION OF HORSERACING AUTHORITIES

WHEREAS, the Members are united by general principles for the progress of breeding and racing as defined in Article II, and

WHEREAS, the Members each approved of certain Articles contained in the International Agreement on Breeding and Racing, and

WHEREAS, the Members have each agreed that it is necessary to protect, coordinate and harmonize, for purposes of organization and control, the essential rules of racing, and

WHEREAS, each of the Members believes it is necessary to ensure the quality and fairness of racing in the interest of both the participants therewith and the general public and, thereby, play an active role in the progress of racing, and

WHEREAS, each of the Members believes it is necessary to promote and protect the services provided by national racing authorities, federations and organizations, and

WHEREAS, each of the Members agrees it is necessary to deal with the effect of the new communication technologies on the way the racing product is marketed, distributed and protected on a global scale.

NOW, THEREFORE, in consideration of the premises and mutual promises contained herein, the parties hereto agree as follows without regard to the date of any individual organization's signing :

CREATION AND MEMBERSHIP OF ENTITY

All Members, without regard to the date of actual signing, do hereby agree to come together for the purpose of forming a non-profit organization to be known as INTERNATIONAL FEDERATION OF HORSERACING AUTHORITIES (hereinafter the " Federation ").

The Executive Council may grant Honorary Member status to a Founding Member which is no longer regarded as the Racing Authority in its country but is still involved in racing. An Honorary Member is liable to Members' annual fee but cannot vote.

Regional and national associations may be nominated for membership by the racing authorities of the countries in which such associations operate and such nominations shall be subject to approval by the Executive Council.

The General Assembly may decide to exclude any member from membership in the Federation by a two-third vote of its Members present or represented.

OBJECTIVES OF THE INTERNATIONAL

FEDERATION OF HORSERACING AUTHORITIES
The Federation shall :
ARTICLE III

ORGANIZATIONAL STRUCTURE OF THE INTERNATIONAL

The Federation shall be organized as follows :

The General Assembly shall be the main authority of the Federation.

All Members are entitled to attend the General Assembly which shall be properly meeting when a minimum of half its members are present.

The total membership from any one country, including a founder member, shall be entitled to one vote in the General Assembly. The Members from each country shall, among and between themselves, determine the procedure to exercize their vote, which shall be approved by a majority vote of such Members.

Each regional Association Member of the Executive Council is also entitled to vote in the General Assembly.

The General Assembly shall take up any issue relating to the objectives defined in Article II hereof.

Decisions of the General Assembly shall be taken by a majority vote of at least two-thirds of the Members present or represented.

The General Assembly shall meet at least once a year. 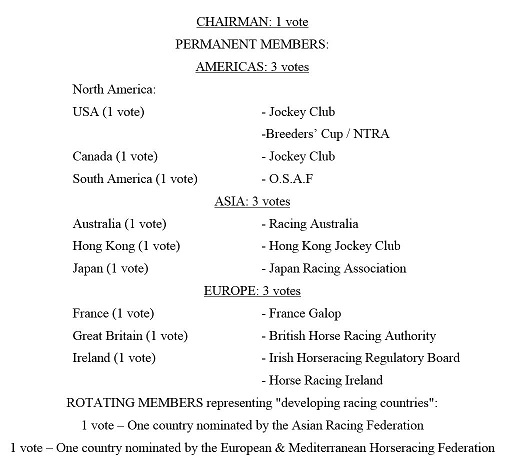 (1) The Chairman of the Federation can either be one of the nominated representatives of the nine Permanent Members or another person. This person is eligible for re-election at the conclusion of any term.

(1) The three Vice-Chairmen must be elected among the nominated representatives of the nine Permanent Members - each representing one of the three main racing regions (Americas, Asia and Europe).

The Executive Council shall meet at least twice a year.

Decisions of the Executive Council shall be taken by a majority vote of at least two-thirds of the Members present or represented.

The Chairman and the Vice-Chairmen will decide annually the other technical attendees to the Executive Council meetings.

The Executive Council shall appoint, from among its member organisations, the Secretariat.

The Secretariat's responsibilities shall include, but not be limited to, the organization of the annual International Conference of Horseracing Authorities and the performance of the administrative affairs of the Federation.

The Executive Council shall have the authority to confer duties and/or responsibilities upon the Secretariat.

The Secretariat shall be maintained at the registered office of the Federation, 46 place Abel Gance, 92100 Boulogne or such other place as may be determined by the Executive Council.

(1) The Executive Council shall nominate a Secretary General who is charged, on behalf of the Secretariat, to set up and follow up its duties.

(2) The Secretary General must:

The Technical Advisors on Regulatory Matters shall provide relevant background knowledge, be alert of current regulatory matters and raise potential issues to the Executive Council for discussion.

Any dispute that may arise between Members of the Federation who are Racing Authorities may be submitted to a conciliation conference which shall be made up of the Chairman of the General Assembly and at least two Members of the Executive Council.